Home Blog ANOTHER LOOK AT THE THOR3D TURNTABLE

ANOTHER LOOK AT THE THOR3D TURNTABLE 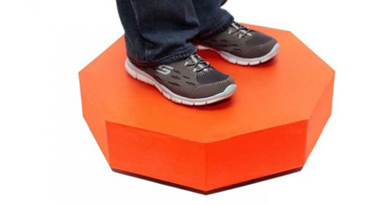 Not much has been said by us about one of our accessories: the Thor3D turntable. Frankly, that’s because it has always been secondary to our main focus – 3D scanners that are our bread and butter. Comparing to a scanner, a turntable is relatively easy to develop and manufacture. The cost of materials is not high and it never gets stuck at customs, because it is seen by border officials as a simple, unthreatening and fairly inexpensive piece of machinery.

Nonetheless, I want to highlight a few things about this equipment. First of all, it is not as simple as it appears on the surface. There are several things we, as the manufacturer, haven’t emphasized enough. The most important is that it was designed specifically with 3D scanning in mind. For example, the shape of the platform is octagonal (has eight sides) and this is not accidental. Since many 3D scanners (not just ours) use geometry of the object in its reconstruction algorithms, the added geometry of the platform, helps create a more accurate 3D model as an outcome. Simply put, 3D scanning is easier, when you place your object (or subject) on this turntable. Another key element is that the speed at which the platform turns can be adjusted from 6.5 rotations per minute to 25. This is useful for many reasons but basically, if you are scanning humans, you generally want to go a bit slower (humans get dizzy easily) and if you are not scanning humans, you can crank up the speed and finish the job faster. 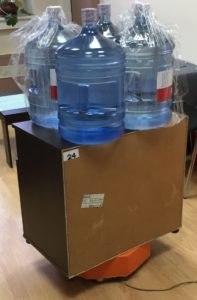 Testing the limits of the Thor3D turntable.


The second thing I wanted to underline is that after releasing this product, we quickly realized that it was being purchased for all sorts of applications that had nothing to do with 3D scanning. Recently, someone purchased five units. Why? Because they will be using them during trade shows and will be rotating several heavy products the client wants highlighted at his exhibition stands. One turntable was purchased by an online-marketing agency, because they want to use it to photograph thousands of products for an online retailer (the products being photographed range in size from tiny to huge and they wanted a single turntable for the job). Another one was bought by a circus, so a skilled Chinese gymnast can perform her routine on it while the platform turns (we wish we had pictures to share).

And this leads me to my third and final point: the turntables were made to be extremely durable because we imagined people hopping on and off them throughout the day. That means they can go for hours, days, and even weeks without being turned off. Sure, the Thor3D turntable might be a bit more expensive than others on the market, but they quickly earned a reputation for durability. In fact, since the release of this product in December 2015, the percentage of units coming back for repairs under warranty has been less than 1%. The forgotten stepchild of our product line deserves recognition for that.