Our vision, when developing Drake, was to give a single tool to the user enabling him to easily scan any object, regardless of its size. We pictured a museum digitizing their whole collection with a single, affordable, easy-to-use, professional tool. We envisioned an injection-molding specialist being able to reverse engineer any object his customers bring him with one device. We imagined a university sharing this scanner among different departments, because it was a multi-purpose instrument. One scanner – any scanning job.

Drake is a hand-held, white light 3D scanner with three interchangeable sets of lenses, each with a different Field of View (FoV). Each set is used to scan different sized objects; we call these lenses — “heads” (because it’s the part of the scanner that has the eyes). The first set of lenses, called “Maxi”, is designed to scan large objects such as cars; the second set, called “Midi” is used to scan medium objects like a dashboard of a car; and the third set, called “Mini”, is meant for scanning small objects, like the gear-shift handle in that automobile. These lenses never have to be calibrated and can be switched out easily (similar to a professional photo camera, where optics are frequently changed out to go from macro- to panoramic-capture).

This scanner is completely wireless: its “body” has a built-in computer, a 7-inch touch screen and a battery. The device captures 3D data and compiles it in real time during scanning. This data is then transferred to the PC via WIFI (or USB flash drive) for finalization and export. Drake will be supplied with our powerful, desktop editing software, as well as the embedded scanning program (Thor3D Suite). Another noteworthy feature is that Drake is equipped with two projectors, instead of the customary one. This means that, using proprietary algorithms, the device is able to capture aspects of objects that were previously difficult for hand-held scanners, like sharp edges and thin plastic walls. And depending on which set of lenses you use, the maximum accuracy of your data will be between 40 and 200 microns; the maximum resolution will be between 0.15mm and 1.00mm. 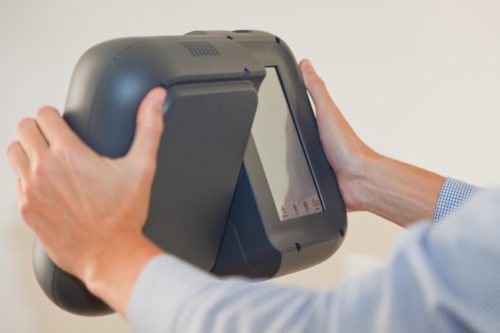 The first scanners will ship in November 2016. It’s important to mention that all three sets of lenses or “heads” will be sold separately, so if you only need one set of lenses, you can buy the “body” and just one “head” and purchase the other “heads” at a later time if the need arises. Advanced orders are now being accepted, so purchase yours today and have one tool for all your 3D-scanning jobs.